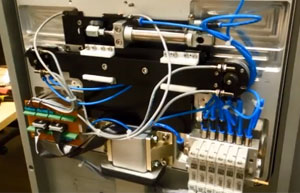 Throughout the semiconductor production process,devices are initially developed on a thin disc of silicon (normally referred to as a ‘wafer’). During the production cycle these wafers must not be exposed to particles or contamination. In order to maintain the level of cleanliness required (far greater than the cleanliness levels witnessed within an operating theatre), wafers are only ever transported in hermetically sealed boxes.These boxes (known as Front Opening Universal Pods or ‘FOUP’s for short) have a front face door that has a complex turnbuckle lock feature.

This system was developed to fully automate the process, and to ensure that no mechanical stress was applied to the wafers.

Got a question? Need a quote? Get in touch.

Our team of experts are available to answer your questions and provide guidance on how we might help you tackle your project.

You can use this tool to change your cookie settings. Otherwise, we'll assume you're OK to continue.

I'm fine with this

Some of the cookies we use are essential for the site to work.

To control third-party cookies, you can also adjust your browser settings.